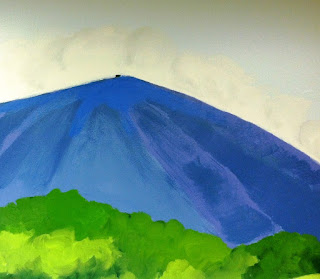 Another finishing touch was the cloud over Grassy Mountain. When I first started the mural, I debated whether to put clouds or not. They're nice to look at and only a little tricky to paint, but they are tricky. Making them look natural and knowing how many to put, when to stop, how sharp or soft to make the edges, how dark to go with the shadowing ~ any one of these things can trip me up a little. As it happened, the cloud that did make it into the mural came along by accident. When I drew the mountain, way back on that first day of painting, I had painted too much of a peak at the top. To correct that, I had tapped some white over it and let Brenda Kilz® over the whole thing. The white of the Kilz® was a nice contrast with the mountain, and we both decided that a cloud there looked good. Besides, real mountains do tend to trap clouds, so we're used to seeing them that way. During the next month, one or the other of us, when knocking off for the day, would remember and say, "We still need to paint that cloud." It looked finished, really, and Kilz® has only a slightly different sheen than our white semi-gloss latex, but it is slightly flatter. I just never seemed to have time to get at that cloud, and it wasn't hurting the looks of the mural. Now that we were onto the finishing touches, I painted the cloud. I wasn't entirely happy ~ didn't think the shadows looked quite natural; but once again, I left well enough alone. The semi-gloss paint did make a difference, and the white cloud made a very nice contrasting color to break up the blue mountain from the paler-blue sky.

Posted by Southern Muse at 7:10 PM

Your thoughts and comments are greatly appreciated!